New Insights Into the Cancer–Microbiome–Immune Axis: Decrypting a Decade of Discoveries

The past decade has witnessed groundbreaking advances in the field of microbiome research. An area where immense implications of the microbiome have been demonstrated is tumor biology. The microbiome affects tumor initiation and progression through direct effects on the tumor cells and indirectly through manipulation of the immune system. It can also determine response to cancer therapies and predict disease progression and survival. Modulation of the microbiome can be harnessed to potentiate the efficacy of immunotherapies and decrease their toxicity. In this review, we comprehensively dissect recent evidence regarding the interaction of the microbiome and anti-tumor immune machinery and outline the critical questions which need to be addressed as we further explore this dynamic colloquy.

It is an oft-quoted fact that the human body has more bacteria as compared to human cells (1). Indeed, the human body is a giant collaboration of symbiotically thriving microbes and hosts cells, constantly interacting with one another. Interestingly, within the ecosystem of the human body, various microbial species colonize distinct niches, but their abundance and functions are liable to fluctuations under the influence of numerous exogenous and endogenous cues. Investigations into these alterations have uncovered the enormous impact of the microbiome on human health and disease (2, 3). Although the scientific community has not been able to characterize the ‘healthy’ microbiome or eubiosis, distinct ‘dysbiotic’ microbial signatures associated with disease states are being increasingly recognized using high throughput sequencing techniques. This has led to delineation of the role of the commensal microbiome in modulating disease progression spanning various pathologies and systems, including cancer.

Genetic mutations have been considered as the main drivers of tumor initiation, with contributions from secondary risk factors like diet, age, lifestyle factors, microbes etc. However, we now know that the microbiome can regulate the effects of tumor-driver mutations as well (4, 5). Many of the important life-style risk factors for cancer like obesity (6), smoking (7), diet (8) and alcohol (9) can cause perturbations in the microbial composition as well. Emerging evidence suggests that host microbial signatures may be able to predict some incipient cancers (10), modulate response to and toxicity of cancer immunotherapy (11–13) and even correlate with survival in specific cancers (14, 15). Extensive exploration of the role of the microbiome in cancer evolution has demonstrated that while the microbiome can affect cancer cells themselves, it can also modulate the cancer immunosurveillance. In this review, we comprehensively describe the microbiome–immune interaction in the homeostatic state as well in cancers. We discuss the various direct and indirect mechanisms by which this immunomodulation occurs and their implications for tumor growth and therapy. Finally, we outline the future directions microbiome research might head towards and the challenges that need to be overcome for deconvoluting this complex crosstalk.

The Microbiome: A Diverse Consortium With Diverse Health Implications

The human microbiome is defined as the collection of all the microorganisms living in association with the human body including the skin, mammary glands, placenta, seminal fluid, uterus, ovarian follicles, lung, saliva, oral mucosa,conjunctiva,biliary tract, and gastrointestinal tract. These communities include eukaryotes, archaea, bacteria, and viruses. Although the number of microorganisms that we harbor is still an unanswered question, what is known with conviction is that they are extremely diverse. It is estimated that approximately 500–1,000 bacterial species exist in the human body at any one time, and there could be several more unique genotypes (subspecies) within them. Each bacterial species has thousands of genes within its genome and that itself makes just the collective bacterial genome several hundred times more than the commonly estimated 20,000 human genes. Between individuals, the diversity among the microbiome is immense compared to genomic variation: individual humans are about 99.9% identical to one another in terms of their host genome (16), but can be 80–90% different from one another in terms of the microbiome of their hand (17) or gut (18). This gives an opportunity to target the more flexible gut microbiome than approaches that target the relatively constant host genome. The microbiome is in a constant state of flux, and it fluctuates with nutrition, age, geography, use of antibiotics/probiotics and other environmental influences. Importantly, we still do not know clearly how this variation in microbiota influences wellness or onset/progression of diseases. However, recent years have seen an increase in our understanding of the role of gut microbiome not only in health but also in the pathogenesis of various disorders like inflammatory bowel disease, ischemic stroke (19), NASH (20), hepatic fibrosis (21) and obesity (22, 23). As such, our understanding of the role of gut microbiome in the pathogenesis of various diseases is continually evolving, with newer data implicating its role in an expanding number of conditions. The association of microbiota and cancer has been known since the early 19th century with the discovery of chicken sarcoma virus, capable of transmitting sarcoma to healthy chickens (24). This was followed by demonstration of the tumorigenic potential of agents like Epstein Barr virus, mammary tumor virus and H. pylori. With improvements in next generation sequencing technologies in the 21st century, plethora of evidence has emerged regarding the role of microorganisms in carcinogenesis.A summary of the studies highlighting this relationship can be found in Table 1.

TABLE 1 Role of the microbiome in cancer progression. 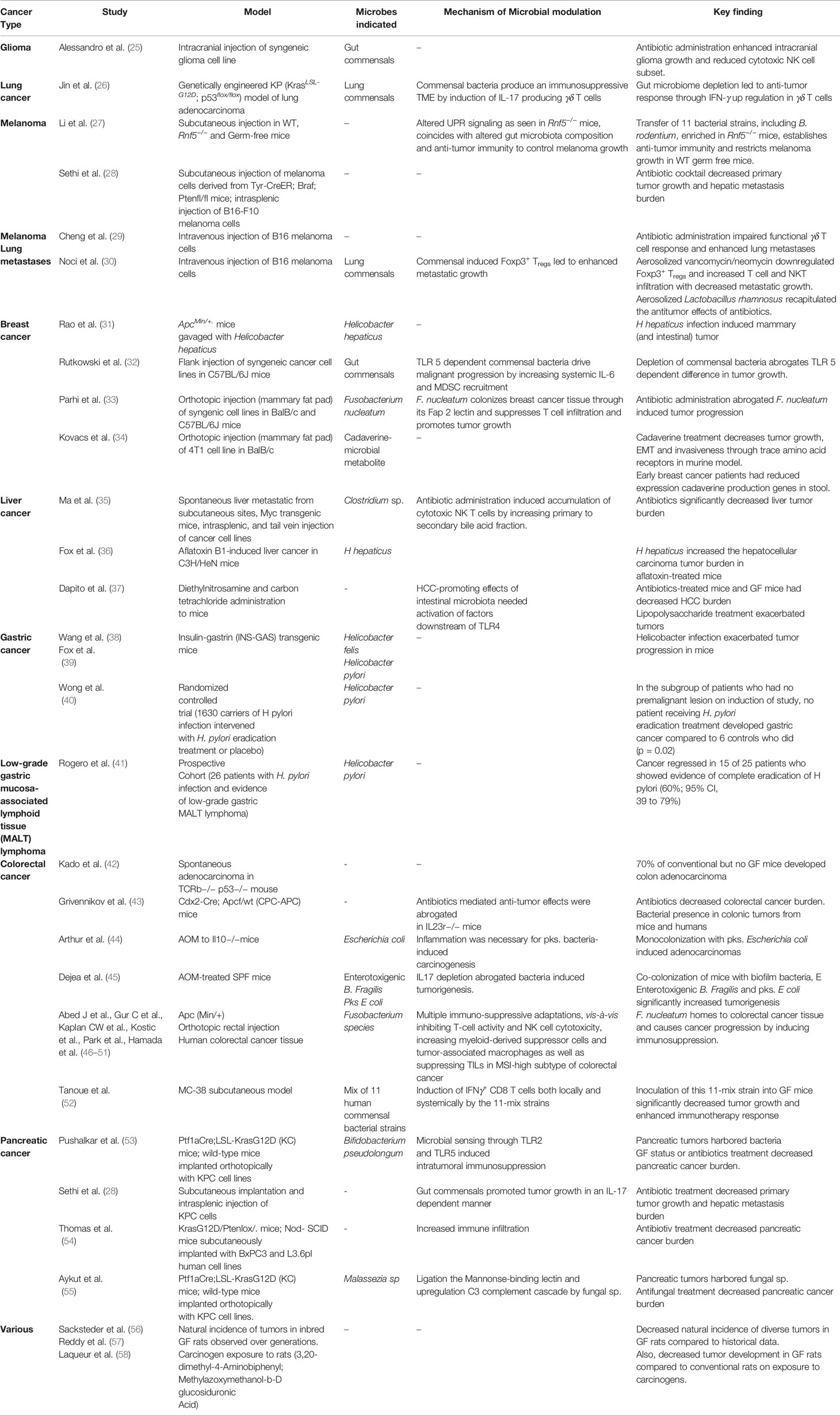